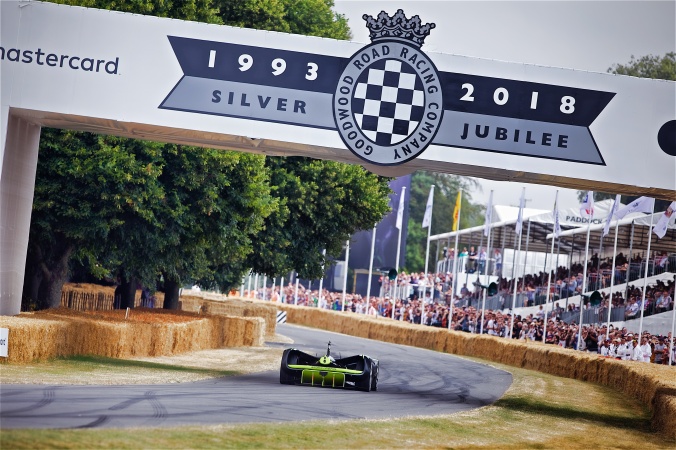 This year the Goodwood Festival of Speed (FOS) celebrated its Silver Anniversary. During this time it has firmly established itself as the UK’s premier motor show, beating off competition from the British International Motor Show held at various venues in its long history from 1903 to 2008.

It’s not difficult to see the appeal either. Rather than just viewing cars in a sterile exhibition hall, like Birmingham’s NEC (where I spent many a happy year with my Dad back in the 1970s), you actually get to see, even sit inside, a lot of the cars in the open in a massive setting.

Great if it’s lovely and sunny like it was last weekend, not so good perhaps in the pouring rain which we normally experience in the final week of Wimbledon!

So big a setting is Goodwood in fact that it takes you several hours to cover the various areas on foot (and a fair amount of time to get in the venue too if you are driving which most people are).

Think of it as the Glastonbury for car buffs with various fields dedicated to different types of cars – much like different musical genres or bands. Some people even camp all weekend, as with a music festival, because there really is such a lot to look at.

Best of all you can see many of the cars racing throughout the day up the famous Goodwood Hill Climb – a stretch of race track measuring 1.86Km (1.16 miles) taking you past the beautiful Goodwood House, the seat of the Duke of Richmond.

As well as thousands of classic cars, race cars, motorbikes and even some planes and helicopters, all the major car manufacturers have vast stands at Goodwood (I was at this year’s show as a guest of Ford). This included Tesla which was showing off its latest, ‘affordable’ electric Model 3 car which should be available next year for a price of around £35,000.

There’s also a section at Goodwood called the Future Lab where you can see future developments in travel. Here I got to play with a very shiny lunar module from Japan-based iSpace which is hoping to become the first private company to launch a module to investigate the surface of the moon in 2020. 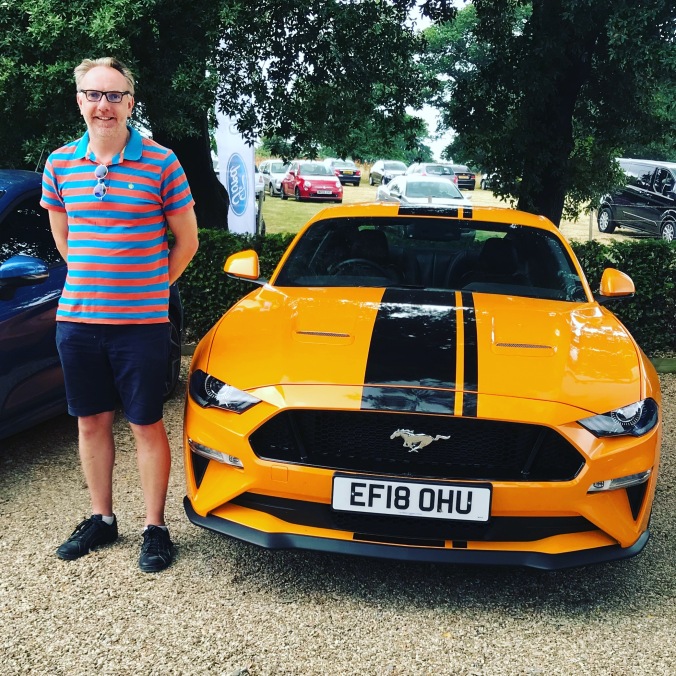 Pictured with the latest and very powerful Ford Mustang which I got to drive around during the Goodwood Festival of Speed, courtesy of Ford.

I also got to see the latest delivery drones used by companies such as DHL to take parcels to remote areas which are difficult to access by road (ie. the Swiss Alps) as well as a completely autonomous race car called Roborace (pictured at the top of the page and below).

Indeed at this year’s Goodwood Festival of Speed Roborace made history by becoming the very first car to achieve the Goodwood Hill Climb without a driver (not even a midget one hidden inside as someone suggested).

Designed by Daniel Simon, the automotive futurist best known for his work in Hollywood films such as Oblivion and Tron, the extremely low-slung vehicle (it’s amazing how low you can make it when you don’t need a human) expertly navigated flint walls and bales of hay on the Goodwood estate using a variety of sensors on Friday 13th of all days!

Roborace’s time wasn’t too shoddy either, averaging a little over 60 miles per hour to complete the testing course in around 1 minute 30 seconds (OK it’s a little off the record of 41.6 seconds set by a racing driver, but it’s still not bad).

Unfortunately the same couldn’t be said for the semi-autonomous Ford Mustang with humans inside. Developed by Siemens in conjunction with engineers from Cranfield University, it did eventually make it to the top of the hill but only in a time of over 4 minutes and only after an altercation with several bales of hay – see pic below.

While the future of cars on the road may well be autonomous it seems we’ve got a few more years of enjoying car shows like the Goodwood Festival of Speed, complete with fully functioning human drivers on the road, first!